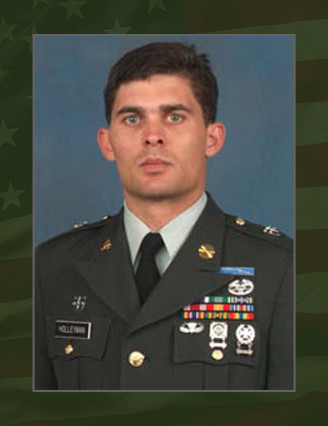 He was killed in action during Operation Iraqi Freedom on Aug. 30, 2004, near Khutayiah, Iraq, when an improvised explosive device exploded near his vehicle.

A native of Glasgow, Mont., Holleyman enlisted in the Army in June 1996 as an infantryman. After completing infantry and airborne training at Fort Benning, Ga., he was assigned to Fort Bragg, N.C., in November 1996 as a platoon armorer in the 82nd Airborne Division’s 1st Battalion, 505th Parachute Infantry Regiment.

After being selected for Special Forces training in 2000, Holleyman was assigned to Fort Bragg’s 1st Special Warfare Training Group (Airborne) in January 2001.

Upon completion of his training as an SF medical sergeant, he was assigned to the 5th SFG in September 2003. Shortly after arriving at the unit, Holleyman deployed to Iraq in support of Operation Iraqi Freedom. He deployed in support of OIF for a second time in July 2004.