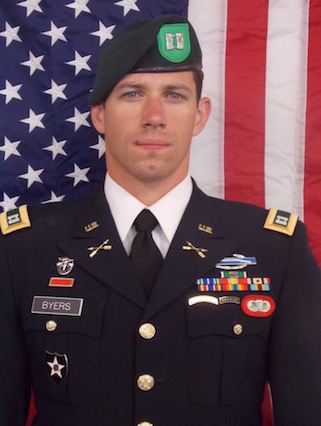 Byers was born, September 2, 1986, in New York. He graduated from the U.S. Military Academy at West Point in 2008 with a Bachelor of Arts degree in History and was recently selected as a General Wayne Downing scholar.

After commissioning as an infantry officer, he served with the 1st Battalion, 138th Infantry Regiment, 2nd Infantry Division, where he completed a combat rotation to Iraq as a rifle platoon leader during Operation Iraqi Freedom.

Byers joined the 2nd Battalion, 10th Special Forces Group (Airborne) in the summer of 2014 and served as the executive officer for Bravo Company, 2nd Battalion, 10th SFG (A), where he supported a successful company deployment for training to the Joint Readiness Training Center.

He was posthumously awarded the Silver Star, the Bronze Star Medal, and the Purple Heart.