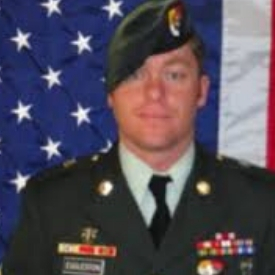 He was assigned to Company B, 4th Battalion, 3rd Special Forces Group (Airborne), Fort Bragg, N.C. and was deployed in support of Operation ENDURING FREEDOM. This was Staff Sgt. Eggleston’s third deployment in support of Overseas Contingency Operations.
He attended West Carolina University and graduated in 2005 with a Bachelor’s degree in Criminal Justice.

He enlisted in the U.S. Army in July 2006. Upon completion of basic training and advanced individual training, he attended the Special Forces Assessment and Selection Course.

He completed the Special Forces Qualification Course in March 2009 and was assigned to 4th Battalion, 3rd Special Forces Group (Airborne) at Fort Bragg as a SF Communications Sergeant.

Eggleston is survived by his wife and their two daughters.