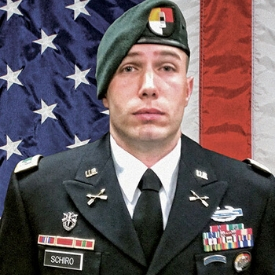 He was assigned to Company B, 1st Battalion, 3rd Special Forces Group (Airborne), Fort Bragg, N.C., and was deployed in support of Operation Enduring Freedom. This was his fifth combat deployment, and fourth to Afghanistan.

Schiro enlisted in the Army in June 2004 as an airborne infantryman. After completing his initial Infantry and Airborne training at Fort Benning, Ga., he was assigned to the 3rd Battalion, 504th Parachute Infantry Regiment, 82nd Airborne Division, at Fort Bragg. While with the 3rd Bn., Schiro deployed to Iraq for six months in 2006. Schiro volunteered for the Special Forces Assessment and Selection upon his return to Fort Bragg, and was selected to attend the Special Forces Qualification Course. He graduated in March 2008 and was assigned to the 1st Bn., 3rd SFG (A), as a Special Forces Communications Sergeant.

After serving on three deployments to Afghanistan with the 1st Bn., Schiro attended the Special Forces Warrant Officer Technical and Tactical Certification Course. He graduated in May and was assigned as an assistant detachment commander in Company B.