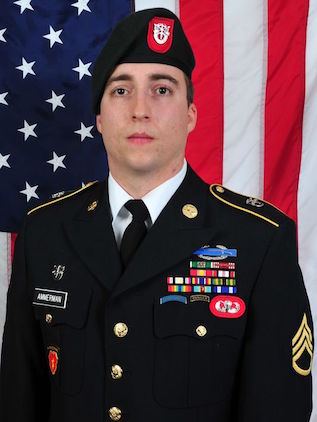 Staff Sgt. Matthew Ammerman, a native of Noblesville, Ind., was assigned to 3rd Battalion, 7th Special Forces Group (Airborne) when he died Dec. 3, 2014, as a result of wounds received in combat.

Ammerman joined the Army in July 2004, attending basic and advanced individual training as well as the U.S. Army Airborne School at Fort Benning, Georgia. He was then assigned to 3rd Battalion, 509th Infantry Battalion (Airborne) based at Fort Richardson, Alaska, as an antiarmor specialist. Ammerman deployed twice with the unit, once to Iraq in 2006 for 14 months, and later to Afghanistan in 2009 for 12 months, serving as an assistant gunner, fire team leader and squad leader.

In May of 2011, he was assigned to 3rd Battalion, 69th Armor Regiment based at Fort Stewart, Ga. and served as a senior sniper and squad leader with the battalion.

He volunteered for Special Forces in 2012, graduated in 2013 as a Special Forces communications sergeant and was assigned to 3rd Bn., 7th SFG (A) in July,2014. He deployed in late fall of 2014 in support of Operation Enduring Freedom.