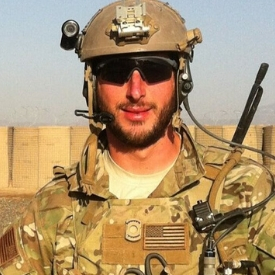 Simpson was assigned to Company C, 4th Battalion, 1st Special Forces Group (Airborne), Joint Base Lewis-McChord, Wash., as a weapons sergeant. He was deployed in support of Operation Enduring Freedom-Afghanistan. This was Simpson’s third deployment to an Overseas Contingency Operation.

Simpson enlisted in the Army in April, 2003, as an infantryman.

He was assigned to Company C, 4th Bn., 1st SFG (A) as a weapons sergeant. He participated in the multilateral exercise Cobra Gold in Thailand in 2012 and recently deployed in support of OEF-A.

He was posthumously awarded the Purple Heart.

He is survived by his wife, two sons and his parents.