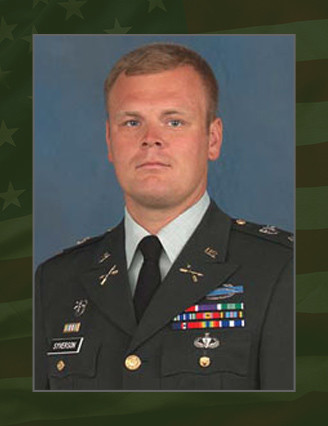 He was killed in Iraq on June 16, 2004, during a rocket attack on Logistical Support Area Anaconda, Balad, Iraq. The rocket landed near a group of Soldiers outside of the Post Exchange.

Syverson was a native of Arlington Heights, Ill., and entered the Army in 1993 following graduation from the Virginia Military Institute, where he earned a bachelor’s degree in international relations.

His first assignment was with the 3rd Battalion, 41st Field Artillery, Fort Stewart, Ga. In 1998, he graduated from the Special Forces Qualification Course and was assigned to the 5th SFG.

While assigned to the 5th SFG, he served in a variety of positions including: Operational Detachment-A commander, battalion staff officer and Group assistant operations officer. He also served as the commander of Headquarters Support Company, 3rd Battalion, 5th SFG.

Syverson is survived by his wife, Jackie, a son, Paul, and a daughter, Amy Elizabeth.