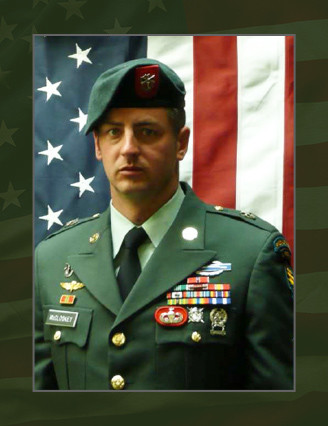 Sgt.1st Class Shawn P. McCloskey, 33, died on Sept. 16, after his vehicle was struck by an improvised explosive device, while conducting a mounted patrol in the Afghan city of Ghur Ghuri, in support of combat operations while serving with, Company B, 3rd Battalion, 7th Special Forces Group (Airborne).

He deployed in support of Operation Enduring Freedom in July 2009 as a member of the Combined Joint Special Operations Task Force – Afghanistan. This was his third deployment to Afghanistan in support of the Global War on Terror. He also served on to deployments to Colombia. He was a Special Forces intelligence sergeant.

McCloskey a native of Hudson, N.Y., grew up in Peachtree City, Ga., enlisted into the U.S. Army January 2002 as a Special Forces candidate. He completed the Special Forces Qualification Course May 2004 and earned the coveted “Green Beret” as a Special Forces engineer sergeant. He was assigned to Co. B, 3rd Bn., 7th SFG (A).

McCloskey is survived by his wife Jessica, daughter Katie and son Collin of Raeford, N.C. and parents Patrick and Kathryn McCloskey of Fayetteville, Ga.