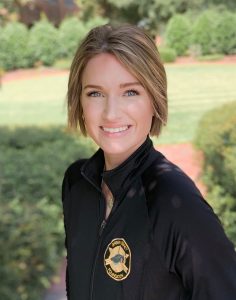 Lindsey Schiro’s ties to the military trace back to her childhood, when her father served his Medical Residency in the Navy before settling the family in Massachusetts. Lindsey attended Colby-Sawyer College, where she earned a degree in Psychology before moving to Boston to work in the healthcare industry.

Since her involvement with the Green Beret Foundation, Lindsey has been Lead of the Ft. Bragg chapter of the Steel Mags, and has established relationships with the Care Coalition, U.S Army John F. Kennedy Special Warfare Center and School, USASOC, and the American Red Cross in support of the Green Beret Foundation. She sat on the board of the Seriously Injured Soldier Initiative with the American Red Cross, an initiative that was established to garner more support for single injured soldiers at Ft. Bragg.

Additionally, Lindsey has created and implemented Green Beret Foundation sponsored Care Teams across all of 3rd Special Forces Group, with efforts to spread awareness across the regiment. She has also submitted an Armed Forces Family Action plan, to create more support for the families of Purple Heart recipients who stay in theater to recover from their injuries.

Outside her work with the Green Beret Foundation, Lindsey volunteers with Blue Star Families and serves as a hospital advocate for Friend to Friend, supporting survivors of sexual assault and human trafficking. She is currently working towards obtaining a Graduate Certificate in Nonprofit Leadership and Management.