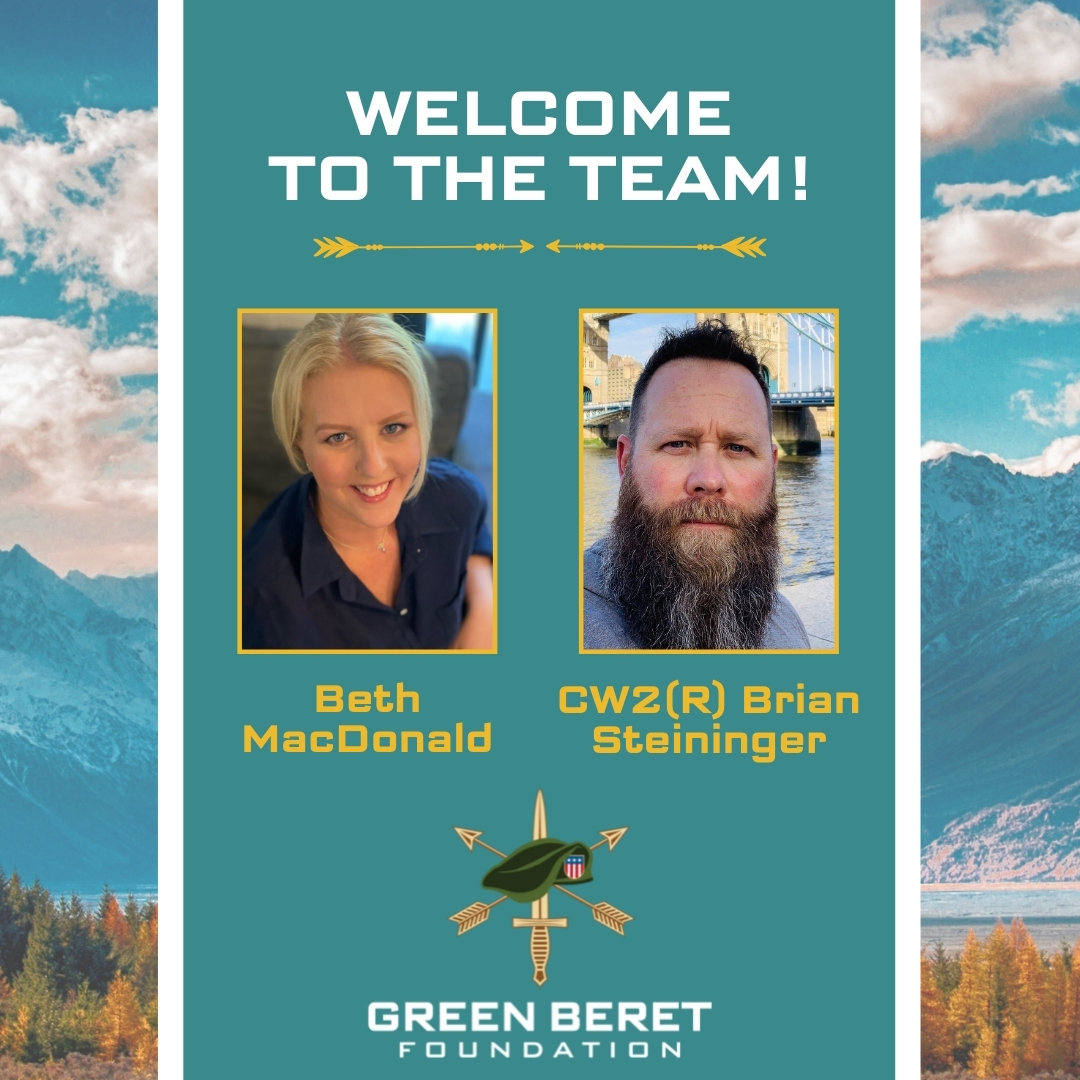 The Green Beret Foundation, an organization dedicated to supporting soldiers of the U.S. Army Special Forces and their families, is pleased to announce that Beth MacDonald and Brian Steininger have joined the team in the role of Veterans Services Officers (VSOs).

As VSOs, Beth and Brian will serve as points of contact in the Ft. Bragg and Ft. Carson areas for all things related to benefits and the VA claims process. Reviewing medical records, submitting claims to the VA, and handling the appeals process are to be central functions of the Green Beret specific support that they will be providing. Their training is being overseen at GBF headquarters by VA accredited Veterans Services Officers Al Stickland and John Armezzani, Beth and Brian prepare for additional training and certification from the accrediting body, National Association of County Veteran Services Officers (NACVSO).

Brian Steininger is a former Green Beret with over 20 years’ worth of experience, having served on multiple combat rotations in Afghanistan, as well as additional operations across Eastern Europe and Northern Africa. Having most recently served as a DOD contractor, his wealth of cross-functional attributes includes a comprehensive background in management, strategic planning, data analysis, and policy compliance. He joins the GBF passionately committed to helping Special Forces soldiers and their families prepare for transition, fully dedicated to the principle of “Green Berets helping Green Berets.”

Brian’s background gives him a firm foundation from which to branch out and continue to serve transitioning members of the Green Beret community. He explains, “As a former 10th Group soldier myself, I can relate to current soldiers and their family members, and I have a firm understanding of the battles and frustrations our community faces. I’m grateful to help bridge that gap now, and be in a position where I can really help other SF soldiers. I just have a heart and a desire to help give back to the community that I was once a part of.”

Beth MacDonald is the Gold Star Spouse of MSG Gregory Trent, who previously served in 3rd Special Forces Group. For the past 20 years, she has held roles in and around the SF community, including work with the DOD, with a continual focus on serving SF spouses and families in a resource and support role. She also does not shy away from sharing that her current spouse is likewise a widow, in his case due to suicide. Encouraging an open dialogue around these issues is critical to Beth’s approach to service, as she has personal first-hand experience with some of the most difficult challenges that a military family could privately face.

“I have seen how hard it is for Gold Star Spouses and soldiers to get their benefits after they have sacrificed for their country,” says Beth, whose current husband Mason, a former KIOWA pilot, is also a 20-year Army veteran; “They have fought so hard for their country, and they shouldn’t have to fight for their benefits. After my husband’s passing, when I had to go through VA benefits, I wasn’t in a state where I even knew what was happening. It was then that somebody grabbed my arm and said, ‘I got you.’ And that’s what we, as GBF Veterans Services Officers, are here to do for fellow Green Berets and their families: be that person for them, and say, ‘I’m going to take this burden off you, because you have done enough. You have suffered enough.’”

About the Green Beret Foundation

The Green Beret Foundation (GBF) provides U.S. Army Special Forces Soldiers and their families with emergency, immediate, and ongoing support. Since its inception in October 2009, GBF provides programs and services in support of the Special Forces Regiment on a daily basis. Since its inception, GBF has invested 84%, or 84 cents of every dollar, into its programs and services, which has totaled to over $16 million that has directly supported the Regiment and its families. GBF is the only non-profit solely dedicated to supporting Green Berets and their families that has achieved a 4-Star Rating with Charity Navigator. Also, GBF is the sole special operations benevolent organization that is accredited by the Department of Veterans Affairs for the purpose of preparation, presentation, and prosecution of disability claims.