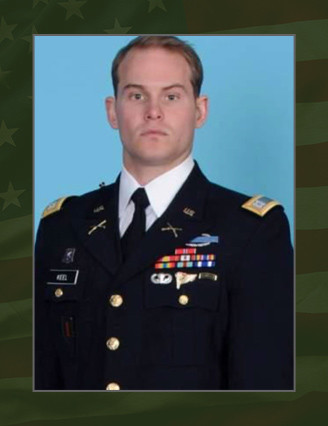 He was assigned to Company B, 1st Battalion, 3rd Special Forces Group (Airborne), Fort Bragg, N.C., and was deployed in support of Operation Enduring Freedom.

Pedersen-Keel was commissioned as an Infantry Officer after graduating from the U.S. Military Academy in 2006. After graduation he attended the Infantry Officer Basic Course and the U.S. Army Ranger School at Fort Benning, Ga. Following his training, he was assigned to the 3rd Brigade Combat Team, 1st Infantry Division (Light) at Fort Hood, Texas.

In June 2008, Pedersen-Keel deployed to Afghanistan for 12 months with the 3rd BCT where he served as a company executive officer and platoon leader. Upon completion of the deployment, he volunteered for the Special Forces Assessment and Selection Course. After completing the Special Forces Qualification Course and language training, he was assigned to the 1st Bn., 3rd SFG (A) as a detachment commander in August 2012. He deployed with the unit to Afghanistan later that year.

He was posthumously awarded the Bronze Star Medal, Purple Heart, and the Meritorious Service Medal.
He is survived by his father, mother, step-father, sister and two step-brothers. He also leaves behind his fiancée.