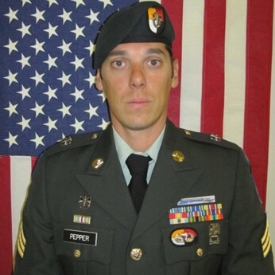 He was assigned to Company B, 4th Battalion, 3rd Special Forces Group (Airborne), Fort Bragg, N.C., and was deployed in support of Operation Enduring Freedom. This was Pepper’s second deployment in support of Overseas Contingency Operations.

He graduated from Kenwood High School in 1999 and enlisted in the U.S. Army Reserves in January 2000.

Upon completion of Basic Training and Advanced Individual Training, he was assigned to the 323rd Military Intelligence Battalion, Fort Meade, Md., where he served as an intelligence analyst and deployed in March 2003 in support of Operation Iraqi Freedom.

Pepper entered Active Duty in 2008 and attended Infantry Advanced Individual Training at Fort Benning, Ga. He was then assigned to the 101st Airborne Division as an Infantry squad leader.

Pepper is survived by his spouse, three brothers and parents.