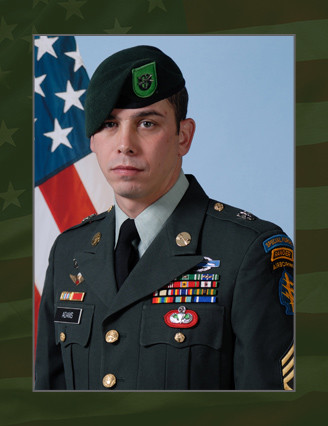 Adams, a native of Oregon, joined the Army in 1995 as an infantryman, where he served with distinction while assigned to 3rd Battalion, 75th Ranger Regiment at Fort Benning, Ga., followed by exemplary service with 1st Bn., 501st Infantry and 1st Bn., 23rd Infantry at Fort Lewis, Wash.

After his assignment at Fort Lewis, Adams earned the Green Beret in 2005. His first Special Forces assignment was as a senior medical sergeant with the 3rd SFG (A) at Fort Bragg, N.C. In 2009, he joined 1st Bn., 10th SFG (A), where he served on a Special Forces team. He was killed in action while conducting combat operations with his team in Afghanistan.

He is survived by his wife Melany, his two sons Jeffrey and John, and his daughter Skye.