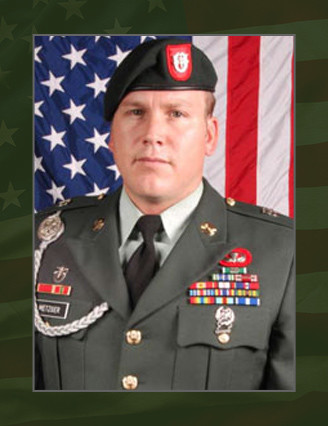 Sgt. 1st Class David E. Metzger, 32, died on Oct. 26 when the helicopter he was aboard crashed while conducting a combat mission in the city of Darreh-Ye Bum, Afghanistan while serving with Company B, 3rd Battalion, 7th Special Forces Group (Airborne).

He deployed in support of Operation Enduring Freedom July 2009 as a member of Combined Joint Special Operations Task Force – Afghanistan. This was his third deployment to Afghanistan in support of the War on Terror.

Metzger, born in San Diego, Calif., enlisted in September 1996 as an Ammunitions Specialist. He later attended the SF Qualification Course, graduating in 2007, as an 18E Special Forces Communications Sergeant and was assigned to 3rd BN, 7th SFG (A).

Metzger is survived by his sons, David and Grant, who reside in Fort Bragg, N.C. He is also survived by his parents David Metzger and Lisandra Holstein, as well as his grandmother Dolores of San Diego, Calif.