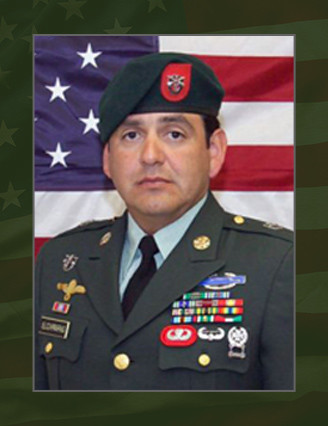 Elizarraras, a native of Pico Rivera, Calif., enlisted as an infantryman in 1986.

His first assignment was with 1st Bn., 327th Infantry Regiment at Fort Campbell, Ky., where he served for four years, deploying to Operations Desert Shield and Desert Storm during that time.

Elizarraras then transferred to 1st Bn., 14th Infantry Regiment at Schofield Barracks, Hawaii, where he served almost three years before becoming an instructor at the Western Hemisphere Institute for Security Cooperation at Fort Benning, Ga. After serving for three years as an instructor, he volunteered for Special Forces training.

His posthumous awards include the Bronze Star Medal for valor, the Purple Heart, the Meritorious Service Medal and the Combat Infantryman Badge.

Elizarraras is survived by his wife, Kris, daughters, Sally and Olivia, and son, Andrew, of Fayetteville, N.C. His parents, Emigdio and Martha, of Pico Rivera, Calif., and sister Leticia of Phoenix, Ariz., also survive him.