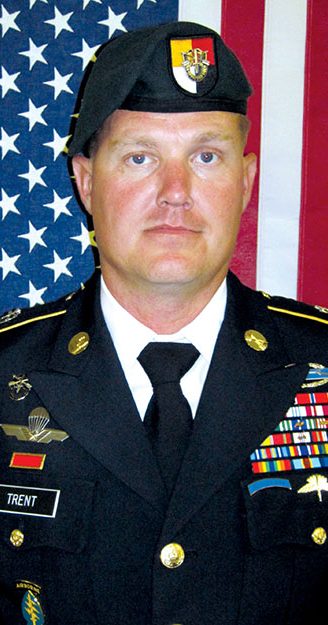 He was assigned to Company B, 4th Battalion, 3rd Special Forces Group (Airborne), Fort Bragg, N.C., and was deployed in support of Operation Enduring Freedom. This was Trent’s fifth deployment in support of Overseas Contingency Operations.

He enlisted as an artilleryman in the U.S. Army in August 1998. Upon completion of his initial training, he was assigned to 3rd Battalion, 319th Airborne Field Artillery Regiment. He was next assigned to Italy, where he served as a howitzer section chief and deployed to both Afghanistan and Iraq.

During his time with 1st Battalion. Trent deployed to Operation Enduring Freedom in 2009. He was then assigned to the 4th Bn., 3rd SFG(A), where he served as a communications sergeant in the with Co. B. He deployed with 4th Bn., in April 2010 for four months and recently returned to Afghanistan with the battalion in January 2012.

He is survived by his wife, daughter, parents and brother.