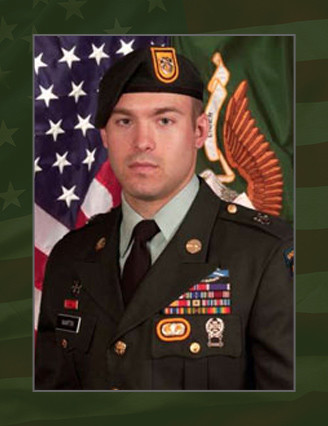 Martin was assigned to 3rd Battalion, 1st Special Forces Group (Airborne), Joint Base Lewis-McChord, Wash. and was deployed in support of Operation Enduring Freedom-Philippines. This was Martin’s first deployment in support of OEF-P; he was a veteran of Operation Iraq Freedom.

Martin, the youngest of five children was born in Maquoketa, Iowa and spent his childhood and teen years growing up in Iowa and Bethany, Okla.

He entered military service in 2001 and was selected to attend the Special Forces Qualification Course in 2004. Upon completion of SFQC, he was assigned to 3rd Bn., 1st SFG (A) at Joint Base Lewis-McChord, Wash.

He was posthumously awarded the Bronze Star Medal, Purple Heart, and the Meritorious Service Medal. Martin is survived by his wife Ashley of Tacoma, Wash. He is also survived by his father and mother Jack and Cheryl Martin of Bethany, Okla; and his brother, Abe, and three sisters Mandi, Amber and Abi.