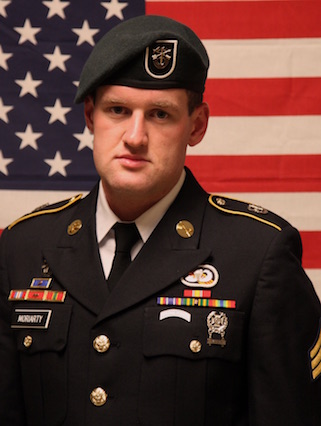 Staff Sgt. James F. Moriarty was born, Jan. 27, 1989 and was killed in action, Nov. 4, 2016, while supporting operations in Jordan. Prior to this deployment, he deployed three times to the Central Command Area of Responsibility in support of contingency operations.

Moriarty was raised in Houston, Texas where he attended Annunciation Orthodox School and Strake Jesuit College Preparatory. He graduated from the University of Texas at Austin in 2011 with a Bachelor’s of the Arts in Economics. He was also a member of the Sigma Phi Epsilon fraternity.

Moriarty enlisted in the U.S. Army on Sept. 13, 2011. He attended Special Forces Assessment and Selection in May 2012 and was selected to attend the Special Forces Qualification Course. He graduated in December 2013 as a Special Forces weapons sergeant. Upon graduation, he was assigned to 1st Battalion, 5th Special Forces Group (Airborne), Fort Campbell, Kentucky.