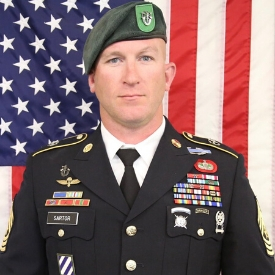 “We’re incredibly saddened to learn of Sgt. Maj. James “Ryan” Sartor’s passing in Afghanistan. Ryan was a beloved warrior who epitomized the quiet professional,” said commander of 10th SFG (A), Col. Brian R. Rauen. “He led his Soldiers from the front and his presence will be terribly missed.

His posthumous awards include the Purple Heart Medal and Bronze Star Medal.