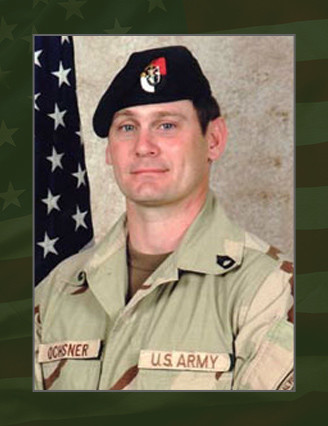 Sgt. 1st Class James S. Ochsner, 36, a Special Forces intelligence sergeant assigned to 2nd Battalion, 3rd Special Forces Group (Airborne) at Fort Bragg, died Nov. 15, 2005, as a result of wounds sustained from an improvised explosive device which detonated while Ochsner was riding in an Up-Armored Humvee near Lawara, Afghanistan. He was in the process of distributing supplies to local nationals at the time of the attack.

Ochsner, a resident of Hope Mills, N.C., enlisted as an artilleryman in 1987.

His first assignment was with 2nd Bn., 14th Field Artillery in Bamburg, Germany where he served for three years.

Ochsner then reclassified as an infantryman and served in the 82nd Airborne Division, Fort Bragg, N.C. where he participated in Operation Desert Storm and completed a tour in the Sinai Peninsula and South Korea before he volunteered as a Special Forces Soldier.

He is survived by his wife, Ann, his son, Nicholas, and daughter, Meagan of Hope Mills. His parents, Robert and Sandra, of Beach Park, Ill, also survive Ochsner.