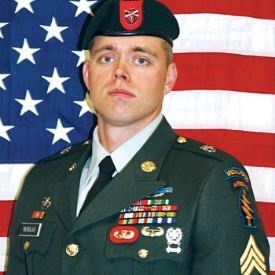 Nicholas, a native of Maysel, W.Va., volunteered for military service and entered the Army in Aug. 1994 as an infantryman. After basic and advanced individual training at Fort Benning, Ga., he was assigned to Co.A, 2nd Bn., 327th Infantry Regiment (Air Assault) at Fort Campbell, Ky. In 1997 he became a team leader when he moved to Co. C, 1st BN., 508th Infantry Regiment (Airborne) at Camp Ederle, Italy. He volunteered for recruiting duty in 2001 and was assigned to the Pittsburgh, Pa. Recruiting Bn. Upon successful completion of that tour, he was assigned as a squad leader when he moved to Co. B, 2nd Bn., 1st Infantry Regiment at Fort Wainwright, Alaska. He began the Special Forces Qualification Course 2005 and he earned the coveted “Green Beret” in 2006 and was assigned to 1st Bn., 7th SFG(A) at Fort Bragg, N.C., as a Special Forces Operational Detachment-Alpha weapons sergeant.