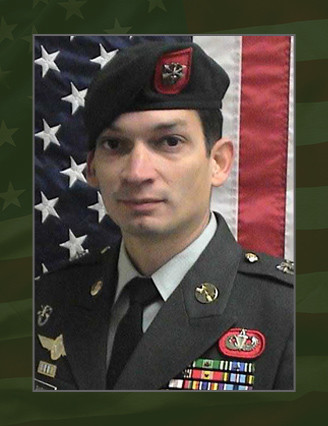 Rada Morales, a native of Naranjito, Puerto Rico, volunteered for military service and entered the Army in April 1995 as an animal care specialist. He was initially assigned as a veterinary technician at Patrick Air Force Base, Fla., where he served for 14 months. In 1996 he moved to the 248th Medical Detachment at Fort Bragg, N.C., then, in 1999, he went to Aberdeen Proving Grounds for three years. He moved back to Fort Bragg, to the John F. Kennedy Special Warfare Center and School, in 2002, first to be an animal care instructor, then as a student; training as a Special Forces medical sergeant. In 2007 he earned the coveted “Green Beret” and was assigned to 1st Bn., 7th SFG(A) at Fort Bragg, N.C., as a Special Forces Operational Detachment-Alpha senior medical sergeant.