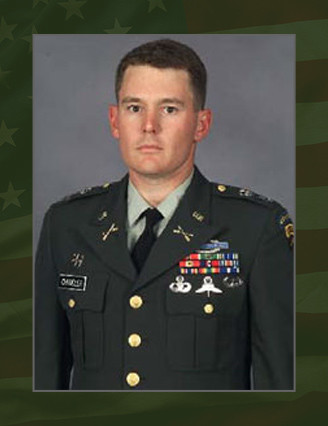 Capt. Jeremy A. Chandler was born on July 25, 1975, in Alabama. He was a Special Forces officer assigned to 1st Battalion, 3rd Special Forces Group (Airborne) at Fort Bragg, N.C.

Chandler died August, 11, 2005, while he was preparing for combat operations near Tarin Khowt, Afghanistan.

A resident of Raeford, N.C., Chandler was commissioned in the Army immediately following graduation from North Georgia College in Dahlonega, Ga., in 1997. He majored in history.

He graduated from basic airborne and infantry officer training at Fort Benning, Ga., in 1998 and was assigned as an as an infantry officer with the 1st Battalion, 187th Infantry Regiment, 101st Airborne Division (Air Assault) at Fort Campbell, Ky. He deployed with the battalion to Kosovo in 2000 supporting Operation Joint Guardian.

He is survived by his wife Wendy, of Raeford, N.C., his parents, Lt. Col. (Ret.) Alan and Jonnie Chandler of Richmond Hill, Ga, and his sister, Alecia Chandler Wilder of Hanford, Ca.