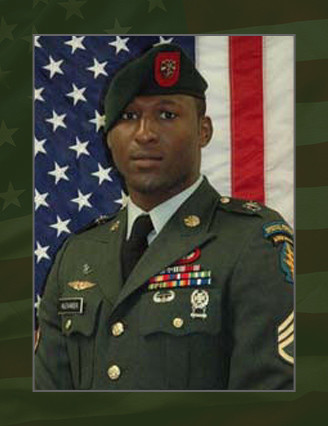 He was killed in action while supporting Operation Enduring Freedom on June 3, 2005, when an enemy Improvised Explosive Device exploded near his Ground Mobility Vehicle during operations in the vicinity of Orgun-e, Afghanistan.

A native of Dale City, Va., Alexander entered the Army in August 1997 and completed One Station Unit Training, at Fort Leonard Wood, Mo. After completing airborne training at Fort Benning, Ga., in April 1998, he was assigned to 27th Engineer Battalion, at Fort Bragg, in support of XVIII Airborne Corps.

Following completion of Special Forces Assessment and Selection, Alexander arrived at the 1st Special Warfare Training Group (Airborne) in October 2002 to begin the more than two years of intense training it would take for him to become a Special Forces engineer sergeant. He was assigned to the 7th SFG in June 2004.

Alexander is survived by his wife, Marissa; and parents, Ronald and Felicia Alexander of Manassas, Va.