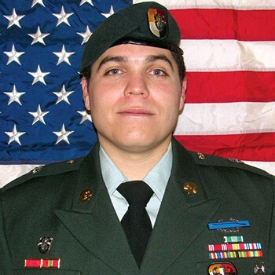 Sgt. 1st Class Martin R. Apolinar died May 29 when the vehicle he was traveling in, while on a mounted patrol, struck an improvised explosive device in the Wardak Province, Afghanistan. He was born Dec. 31, 1982 and grew up in Phoenix. He graduated from the Trevor Browne High School in 2001.

Apolinar enlisted in the U.S. Army in 2004 and served as an infantryman with B Company, 1st Battalion, 41st Infantry Regiment, 1st Armored Division at Fort Riley, Kan. He served as a rifleman, machine gunner and team leader.

Apolinar is survived by his wife Elisa; his son Martin, and his parents Gene and Susan Apolinar of Prescott, Ariz.