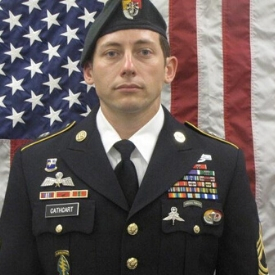 Cathcart was assigned to Company A, 3rd Battalion, 3rd Special Forces Group (Airborne), Fort Bragg, N.C., and was deployed in support of Operation Enduring Freedom. This was Cathcart’s fifth deployment with the battalion, known as Bushmen, to Afghanistan.

Cathcart enlisted in the Army in June 2001 as a fire support specialist. Upon completion of Army Basic Combat and Advanced Individual Training, he reported to the 101st Airborne Division (Air Assault) where he served for more than five years. His tenure at Fort Campbell included two combat tours to Iraq in 2003 and 2005 in support of Operation Iraqi Freedom.

Cathcart volunteered for Special Forces in 2007. After completing Special Forces training, Cathcart was assigned to 3rd Bn., 3rd SFG (A) in September of 2009 as a senior engineer sergeant.