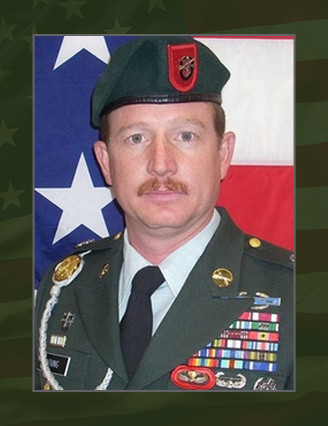 Young, a native of Jonesboro, Ga., volunteered for military service and entered the Army in January 1991 as an infantryman. After basic and advanced individual training at Fort Benning, Ga., he was assigned to Co. A, 3rd Bn., 27th Infantry Regiment at Fort Ord, Calif. In 1993 he became a squad leader when he moved to 3rd Bn., 502nd Inf. Regiment. at Fort Campbell, Ky. In 1995 he moved to Germany and was assigned to Co. B, 1st Bn., 4th Inf. Regiment. Young began the Special Forces Qualification Course and he earned the coveted “Green Beret” in 1999 and was assigned to 2nd Bn., 3rd SFG(A) at Fort Bragg, N.C., as a Special Forces Operational Detachment-Alpha communications sergeant. He left 3rd SFG(A) in 2004 to become a team sergeant at the United States Army Tactical Review Board, Fort Bragg, N.C. He was assigned to his current position at 1st Bn., 7th SFG(A) in October 2007.