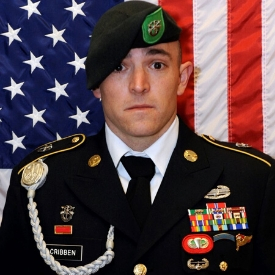 Cribben was born on Jan. 27, 1984, in Rawlins, Wyoming. He began his military service on Nov. 20, 2002, as a Military Police Officer and attended One Station Unit Training at Fort Leonard Wood, Missouri.

“We will honor and preserve his legacy. We will cherish, protect and support his Family. Our focus is with them at this time. We will never forget,” said 10th Group’s commander, Col. Lawrence Ferguson.

Cribben served with the 55th Military Police Company at Camp Page, Korea, from 2003 to 2004; the 716th Military Police Battalion from 2004 to 2010; and USAG Baumholder Provost Marshals Office from 2010 to 2011. In November of 2011, Cribben attended Special Forces Assessment and Selection, and then was selected to attend the Special Forces Qualification Course (SFQC). In December of 2014, Cribben graduated SFQC and was assigned to 10th SFG (A) at Fort Carson, Colorado, where he served in the positions of Special Operations Command Forward-NWA Future Plans NCO and then as Senior Communications Sergeant for a Special Forces Operational Detachment-Alpha.

Cribben deployed to Afghanistan with 2nd Battalion, 10th SFG (A), in September of 2017.