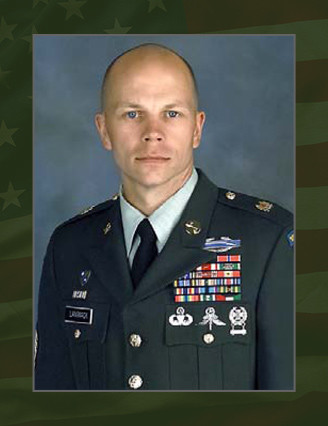 After completing Basic Training and the Ranger Indoctrination Program, Langmack was assigned to the 1st Battalion, 75th Ranger Regiment, at Hunter Army Airfield, Ga. After completing Ranger school in 1992, the young specialist moved to Washington State to join 2nd Battalion, 75th Ranger Regiment at Ft. Lewis. He was promoted to sergeant in June 1993.

He served there until June 1994. He then moved to Fort Benning, Ga. and served as a reconnaissance specialist, a squad leader and a platoon leader at the Ranger’s Regimental headquarters. During this tour of duty, Langmack was promoted to staff sergeant in May 1996 and Sgt. 1st Class in March 2001.

After graduating from the Special Forces Qualification Course in August 2001, Langmack was assigned to 2nd Battalion, 7th Special Forces Group (Airborne), at Fort Bragg, N.C. serving as a Special Forces senior communications sergeant until his reassignment to U. S. Army Special Operations Command in early 2004.

Langmack is a veteran of Operations Desert Storm in Southwest Asia, Uphold Democracy in Haiti, Enduring Freedom in Afghanistan and Iraqi Freedom in Iraq.

His wife, Rachaelle, his two sons, Sam and Carson of Raeford, N.C., and his parents, Louise and Paul Langmack of Seattle, survive him.