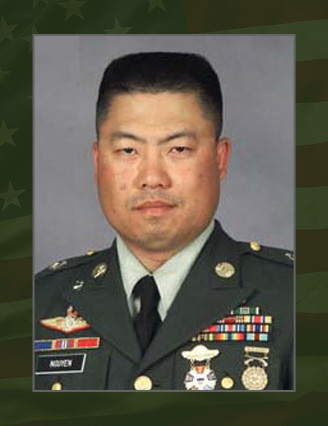 Nguyen was born in Cantho, Vietnam, became a U.S. citizen, and was raised in Tracy, Calif. He enlisted as an infantryman in 1986.

His first assignment was with Company A, 4th Bn., 22d Infantry Regiment, 25th Infantry Division (Light) at Schofield Barracks, Hawaii where he served for three years. He then left active duty and served with the Army Reserve in Sacramento, Calif.

Nguyen began his journey to become a Special Forces Soldier in 1992 and earned the coveted Green Beret when he graduated from the course in 1993. He was assigned to 1st Special Forces Group, Fort Lewis, Wash., that year and served in all three combat battalions during his tenure there, first as a communications sergeant and then as an intelligence sergeant.

In 2003, Nguyen was chosen to become an instructor at the U.S. Army John F. Kennedy Special Warfare Center and School. He served in both instructor and operations positions, preparing Special Forces Soldiers for the rigors of combat, until February 2006 when he was assigned 3rd SFG where he served until his death.