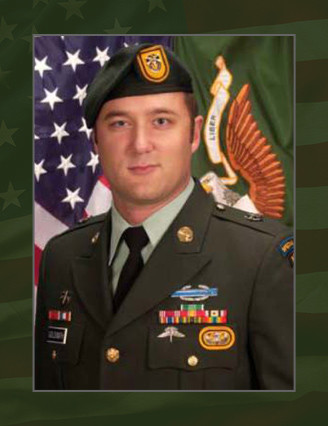 Goldsmith was assigned to A Company, 3rd Battalion, 1st Special Forces Group (Airborne), Joint Base Lewis-McChord, Wash. and was deployed in support of Operation Enduring Freedom-Afghanistan. This was Goldsmith’s third deployment in support of Overseas Contingency Operations.

In October 2004, upon completion of basic training, advanced individual training and the basic airborne course at Fort Benning, Ga. he was assigned to the 1st Special Warfare Training Group (Airborne) at Fort Bragg, N.C. Goldsmith attended Special Forces Assessment and Selection in 2005 and was selected to continue his training as medical sergeant in the Special Forces Qualification Course.

After graduating from the Special Forces Qualification Course in 2008, Goldsmith was assigned to 3rd Bn, 1st SFG (A) Joint Base Lewis-McChord as a Special Forces medical sergeant.

He was posthumously awarded the Bronze Star Medal, Purple Heart, and the Meritorious Service Medal.

He is survived by his parents John and Lorie Goldsmith of Colville, Wash. and his sister Nicole.

At the time of his death, Goldsmith was a staff sergeant. He was posthumously promoted to sergeant first class.