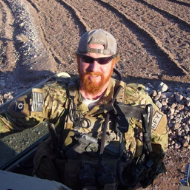 Don currently owns a small start up Team Room Designs, LLC that provides legacy gifts such as wooden flags, coin holders, and other custom builds. It has expanded to laser etching, CNC carving, concealment furniture, and customized glassware/aluminum tumblers. This has allowed him to make several donations in support of the Special Operations Community benevolent organizations and in support of their missions to provide support to the operators, their families, and future fundraising events.