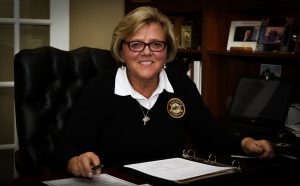 Mrs. Wesseling is a former registered nurse, health care business executive and Executive Director, of Foundation For the Challenged, a charitable foundation for people with developmental disabilities. Mrs. has turned her life-long passion for helping others into advocacy for the Green Beret Foundation in response to its generous funding of her son’s, medical needs in the early years of his traumatic brain injury sustained in Operation Iraqi Freedom. Wesseling states “her passion for helping the Green Beret Community is what she knows her son and his wife, Bianca would do, if they could.”

In 2016, Mrs. Wesseling and her husband founded Project Rise Above, a nonprofit Veteran charity established for expanding the path of support for veteran participants of Veterans Courts in Warren County, Ohio. As former Project Rise Above’s Board President, Mrs. Wesseling oversaw the organization’s mission objectives of raising awareness of Veterans Courts’ Rehabilitation Treatment Program and raising funds to cover the cost of basic living needs not covered by other resources for Veteran participants. Mrs. Wesseling and her husband Jim reside in Maineville, Ohio.