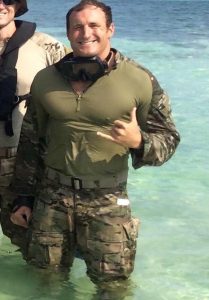 Originally from Madison, Georgia, Dillon attended one of our nation’s premier senior military colleges, the University of North Georgia. As a cadet, he served in various military leadership roles and was captain of the University Men’s Track and Field team, where he competed in the decathlon. Dillon was also a member of the Pi Kappa Alpha Fraternity, and served on the UNG Student Athlete Advisory Board. Upon graduation, Dillon declined to pursue a commission into the officer corps and instead enlisted directly into the Army Special Forces as an 18X.

Upon completion of the Special Forces Qualification Course, he was awarded the coveted Green Beret and assigned to 7th Special Forces Group, where he served as an engineer sergeant and combat diver on an ODA in both combat and advisory roles until his separation from active duty in 2017.

Mr. Bowers is currently a senior partner and the Chief Operations Officer of Roman Sanford, LLC, a private security firm located in NYC and the Hamptons. He is also the Program Director of Roman Sanford BLACK, a philanthropic and training initiative whose services include pro bono security assessments for public school systems and tactical training to local law enforcement and law-abiding citizens.

An admitted degree candidate at Harvard University, he is also pursuing his Masters of Liberal Arts in International Relations, focusing his studies primarily on International Security and National Security strategy. Mr. Bowers is a legacy member of the OSS Society, and a member of the American Legion. Dillon and his wife Dr. Anne Wills Bowers currently reside in Hampton Bays, NY where she is completing her general surgery residency.