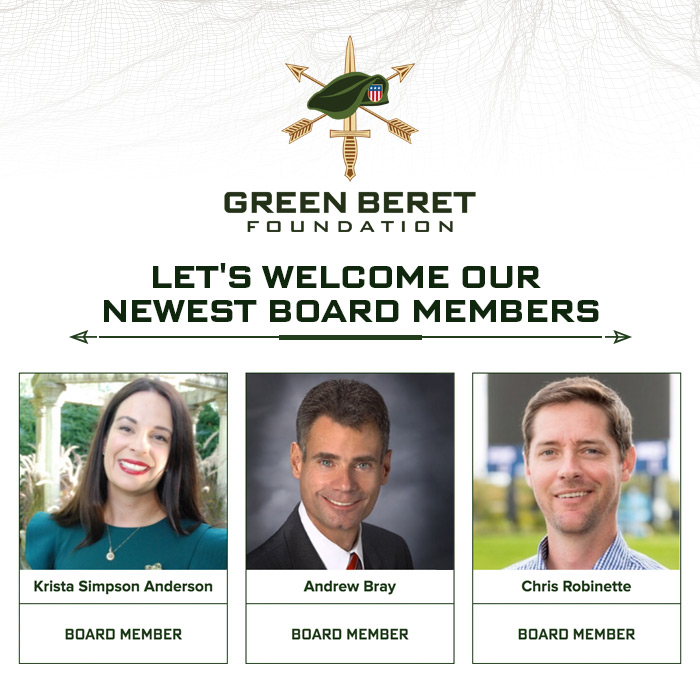 The Green Beret Foundation, an organization dedicated to supporting soldiers of the U.S. Army Special Forces and their families, is pleased to announce the appointment of Mrs. Krista Simpson Anderson, Mr. Andrew Bray, and Mr. Chris Robinette to its Board of Directors.

Krista Simpson Anderson is the proud wife of an active duty Green Beret, mother of two boys and the Gold Star spouse of Green Beret SSG Michael H. Simpson who passed away on 1 May 2013 from wounds sustained in an Improvised Explosive Device (IED) attack in Eastern Afghanistan. Krista serves at the Green Beret Foundation Gold Star and Surviving Family Liaison where her mission is to assist all surviving families as they navigate the loss of their Green Beret and begin their way forward.

Andrew Bray is an attorney with Vernis & Bowling, in Miami, Florida. He has been practicing law in Florida since 2004, and previously was in private practice in Hartford, Connecticut. In addition to his legal and educational experience, Andrew served over 11 years in the U.S. Army Special Forces, on both Active and Reserve duty. After completion of the SFQC, he served on ODA 742, (A. Co. 2nd Bn, 7th Special Forces Group Airborne). Following active duty, Andrew then served in the US Army Reserves, with ODA 115 (A. Co. 1st Bn, 11th Special Forces Group Airborne), until the Army Reserve component of SF was deactivated, at which time he became of member of 20th Special Forces Group (Airborne), under the auspices of the Massachusetts National Guard.

Chris Robinette is a General Partner with Arrowhead Venture Partners, a venture capital fund investing in exceptional veteran founded and operated businesses. Additionally, he is the Chief Operating Officer for a private medical practice group in Los Angeles, CA. He spent most of his career as an officer in Special Operations including positions in 10th Special Forces Group (ODA 0426), the Special Operations Training Detachment at JRTC, and 19th Special Forces Group (Airborne). He continues to serve in the Army Reserve in a special operations staff assignment.