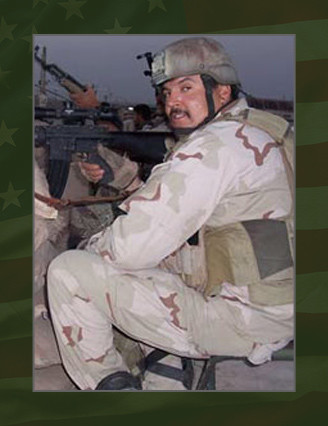 Master Sergeant Anthony Ray Charles Yost, 39, a Special Forces Operational Detachment – Alpha Team sergeant assigned to 3rd Battalion, 3rd Special Forces Group (Airborne) at Fort Bragg, N.C., died Nov. 19, 2005, as a result of an explosion which occurred inside a building in Mosul. Yost and other Soldiers were searching a building for insurgents. During their search, an explosion occurred and the building collapsed. Yost was killed by the blast.

Yost was born in Oklahoma and reared in Flint, Mich. He enlisted in the Army in 1987.

His assignments included tours in South Korea, Fort Lewis, Wash., and Fort Bliss, Tex. prior his training and service as a special forces Soldier.

Yost graduated the Special Forces Qualification Course in 1993 and was assigned that year to 2nd Bn., 10th SFG at Fort Carson, Co., as an SF weapons sergeant. After serving eight years in 10th SFG, Yost was assigned in 2001 to the U.S. Army John F. Kennedy Special Warfare Center and School at Fort Bragg, N.C., where he served as a senior SF weapons instructor. In March 2005, Yost was assigned to 3rd Bn., 3rd SFG and served there as an Operational Detachment – Alpha team sergeant until his death.

He is survived by his wife, Joann, and his children Donovan, Cheyenne, Anthony.