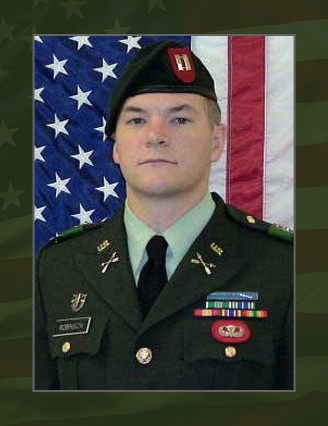 He was killed in action while supporting Operation Enduring Freedom on June 3, 2005, when an enemy improvised explosive device exploded near his Ground Mobility Vehicle during operations in the vicinity of Orgun-e, Afghanistan.

Robinson deployed to Afghanistan in January 2005 in support of the Global War on Terrorism.

A resident of Haddon Heights, N.J., Robinson was commissioned in the Army immediately following graduation from Cedarville College in Ohio May 1998, where he earned a bachelor’s degree in foreign trade.

Robinson graduated from the Special Forces Qualification Course and was assigned to 7th SFG in December 2003.

Robinson is survived by his wife, Laura; and parents, Charles and Janet Robinson of Brown Mills, N.J.