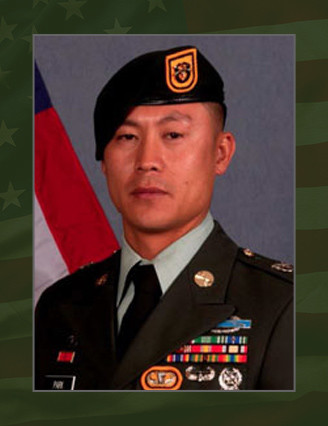 Sgt. 1st Class Dae Han Park, 36, of Lacey, Wash., died after his vehicle was struck by an improvised explosive device March 12, 2011 in the vicinity of Kajran, Daykundi, Afghanistan.

Park was assigned to Charlie Company, 3rd Battalion, 1st Special Forces Group (Airborne), Joint Base Lewis-McChord, Wash. and was deployed in support of Operation Enduring Freedom-Afghanistan. This was Park’s fourth deployment in support of overseas contingency operations.
Park, a graduate of Watertown High School in Watertown, Conn., enlisted in the U. S. Army in February 1998, as an Infantryman.

In 2000, he earned the coveted Ranger Tab and participated in the Best Ranger Competition in 2002. In March 2003 he deployed in support of Operation Iraqi Freedom, as a rifle squad leader.

Park was then assigned to 3rd Bn, 1st SFG (A) Joint Base Lewis-McChord as a Special Forces communications sergeant with Operational Detachment Alpha 1333. During his time with 3rd Bn, he completed numerous worldwide missions to include: Bangladesh, Operation Iraqi Freedom VI, Operation Enduring Freedom-Philippines, Cambodia, and India. This was his first rotation to Afghanistan.

He was posthumously awarded the Purple Heart.

He is survived by his wife, Mi Kyong Park; his daughters Niya and Sadie; his parents Joseph and Bonnie Schneider of Thomaston, Conn.; and his sister and brother, Katie and Saejin of Watertown.