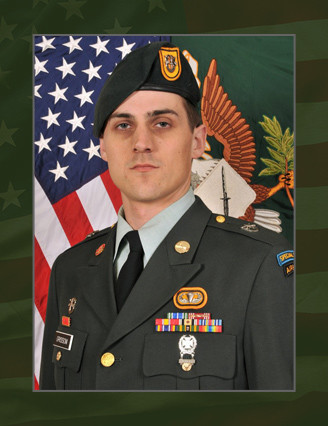 Grissom was assigned to Company A, 4th Battalion, 1st Special Forces Group (Airborne), Joint Base Lewis-McChord, Wash., and was deployed in support of Operation Enduring Freedom-Afghanistan. This was Grissom’s fifth deployment to an Overseas Contingency Operation.

Grissom graduated from Mt. Eden High School in 1999 and attended college at the Art Institute of San Francisco, earning his Associate’s Degree in Computer Animation.

He enlisted in the Army in June, 2003, under the 18X Special Forces Enlistment Program.

After graduating from the Special Forces Qualification Course in October, 2005, Grissom was assigned to 2nd Battalion., 1st SFG (A) JBLM. During his time with 2nd Battalion, Grissom deployed on several JCETs (Joint Combined Exchange Training), and deployed to Iraq in 2009. Grissom was re-assigned to 4th Battalion in Nov. 2010 as an engineer sergeant and deployed to Afghanistan in support of Operation Enduring Freedom-Afghanistan in 2012.

He was posthumously awarded the Bronze star Medal and the Purple Heart.

He is survived by his wife, parents and his sister.