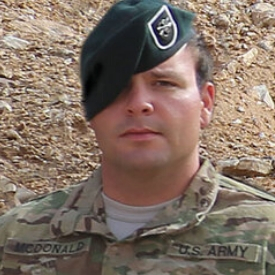 Staff Sgt. Jason A. McDonald, 28, of Butler, Ga., died June 9, 2014, of wounds sustained from an operation in Zabul Province, Afghanistan.

He was assigned to Company B, 1st Battalion, 5th Special Forces Group (Airborne), Fort Campbell, Ky., and was deployed in support of Operation Enduring Freedom.

McDonald enlisted as an infantryman in the U.S. Army in 2004. Upon completion of his initial training, he was assigned to Co. C, 3rd Bn., 75th Ranger Regiment at Fort Benning, Ga. His next assignment was with Co. A, 2nd Bn., 8th Infantry Regiment, Fort Carson, Colo., as a grenadier.

McDonald volunteered for the Special Forces Assessment and Selection Course, and graduated from the Special Forces Qualification Course in 2010. Upon earning his Special Forces tab, he initially reported to Co. C, 1st Bn., 1st Special Warfare Training Group. He was then assigned to 1st Bn., 5th SFG (A) as a Weapons Sergeant. He served on one deployment to Afghanistan and two to Iraq.