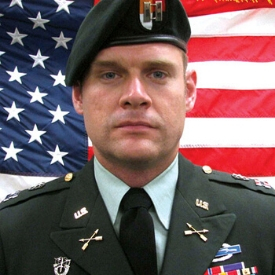 He deployed in support of Operation Enduring Freedom in July 2010 as a member of the Combined Joint Special Operations Task Force – Afghanistan. This was his second deployment.

Holbrook, a native of Burnet, Texas, was accepted to the United States Military Academy where he majored in Environmental Science. Capt. Holbrook’s first assignment was as a Rifle Platoon Leader in Alpha Company, 1st Battalion, 501st (Airborne) at Fort Richardson, Alaska. He served there for three years and deployed with the unit to Iraq between 2006 and 2007. Following his deployment he reported to Fort Benning, Ga.. to attend the Maneuver Captains Career Course and then Fort Bragg, N.C., to attend the Special Forces Qualification Course. Capt. Holbrook graduated the course on the 16th of April 2010 and reported to 1st Battalion, 3rd Special Forces Group on the 27th of May.

Holbrook is survived by his wife Heather Holbrook of Fayetteville, N.C.; mother and father Joan and James Holbrook of Burnet, Texas.