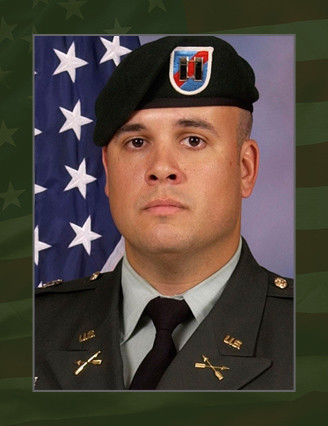 Major Jeffrey R. Calero, 34, was killed in action on Oct. 29, while conducting a combat patrol in the southern Afghan city of Kajaki while serving with ODA 2132 of Company C, 1st Battalion, 20 th Special Forces
Group (Airborne).

Calero, born in Puerto Rico and raised in Queens Village, N.Y. graduated from Saint Francis Preparatory High School in Queens, N.Y. where he excelled in football. Upon graduation he received a partial scholarship to attend Rensselaer Polytechnic Institute in Troy, N.Y. He voluntarily enrolled in ROTC and upon graduating with a Bachelor of Science Degree in Mechanical Engineering in 1995 was commissioned as a Infantry 2 nd Lt. in the U.S. Army. In 2001 he earned the coveted “Green Beret.”

As a civilian, Calero worked in New York City as a Mechanical Engineer. He was working towards earning his Professional Engineering License to open his own firm.

Calero was posthumously promoted to the rank of major.

Calero is survived by his father and mother, Raymond and Roselle Calero both of Queens, N.Y.; brother, Dennis Calero; sister, Irene and sister, Joyce Crespo and three nieces, Amelia, Lauren and Claire.