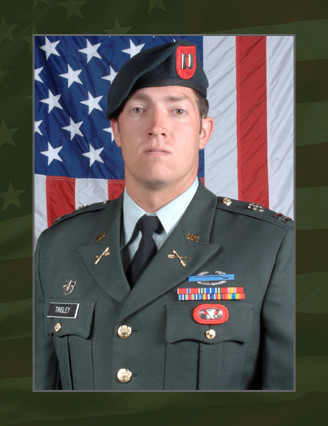 Capt. John Tinsley, 28, was killed Aug. 12, 2009, while conducting a mounted patrol in the Oruzgan Province, Afghanistan, in support of combat operations while serving with Company B, 2nd Battalion, 7th Special Forces Group (Airborne).

He deployed in support of Operation Enduring Freedom in July 2009 as a member of the Combined Joint Special Operations Task Force – Afghanistan. This was his third deployment in support of the Global War on Terror and first deployment to Afghanistan. He was a Special Forces Operational Detachment- Alpha team commander.

Tinsley was a native of New Jersey, and was commissioned in August 2002 after graduation from Florida State University, Tallahassee, Fla. He was assigned to the 1st Bn., 12th Infantry Regiment, 4th Infantry Division at Fort Carson, Colo. He was then later assigned to the 1st Bn., 3rd Infantry Regt., at Fort Myer, Va. as a member of the “Old Guard” in 2004. In 2006 he was deployed to Iraq as a member of Multi-National Corps-Iraq. He began the Special Forces Qualifications Course January 2007 and earning the coveted “Green Beret” in January 2009.

Tinsley is survived by his wife, Emily, and daughter, Isabella, of Fayetteville, N.C.; mother Debra, and father John Tinsley, of Jacksonville, Fla.