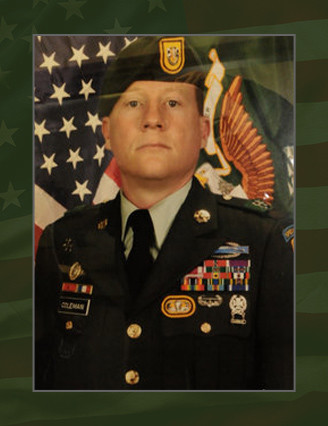 Master Sgt. Mark W. Coleman, of Yelm, Wash. died when he stepped on an improvised explosive device on May 2, 2010, in Kandahar Province, Afghanistan.

Coleman was assigned to C Company, 2nd Battalion, 1st Special Forces Group (Airborne), Joint Base Lewis-McChord, Wash. and was deployed in support of Operation Enduring Freedom-Afghanistan. This was his fifth deployment in support of an Overseas Contingency Operation.

Coleman, a graduate of Goldendale High School in Goldendale, Wash., enlisted in the U.S. Army on Oct. 31, 1988, as a Fire Support Specialist.

Coleman was then assigned to 3rd Battalion, 1st Special Forces Group (Airborne) at Joint Base Lewis-McChord as a Special Forces weapons sergeant. He served in the unit from 2001-2006 and completed two rotations to the Philippines in support of Operation Enduring Freedom-Philippines.

In 2006, Coleman was selected to participate in the Military Personnel Exchange Program and was assigned to the Australian Special Air Service Regiment. During his time with the Australian SAS, he completed two tours in Afghanistan in support of Operation Enduring Freedom-Afghanistan.

He was posthumously awarded the Bronze Star Medal and the Purple Heart.
Coleman is survived by his wife, Barbie of Yelm and their children, Brett of Fort Richardson, Alaska and Jessica of Yelm. He is also survived by his mother Alice Fay Eshelman of Centerville, Wash., his adoptive-father James Coleman of Wenatchee, Wash. and his father Harley Neal Vermilion of Texas.