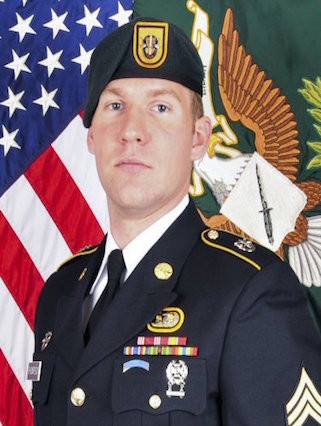 Matthew Thompson was born on June 22nd, 1988 in Minneapolis, Minn.  He graduated as an honor student from Brookfield Central High School in 2006.  While attending high school, Matthew competed in football and pole vault.

Following high school, he attended Concordia University in Irvine, Calif. where he was a competitive swimmer for three years and graduated with a Bachelor of Arts degree in Theological Studies. After graduating from college, Matthew traveled to East Africa and helped start a non-profit organization for homeless boys in the slums of Nairobi, Kenya.

SSG Thompson enlisted in the Army in March, 2011.  Upon completion of Basic Training and Advanced Individual Training, he immediately attended Airborne School at Fort Benning, Ga. He then attended the Special Forces Assessment and Selection course in October, 2011 at Fort Bragg, N.C.

SSG Thompson deployed in support of Operation Inherent Resolve on December 8th, 2014 where he advised and trained Iraqi Security Forces Soldiers.  His efforts greatly enhanced the medical competency and readiness of U.S. coalition partners.  Upon redeployment, SSG Thompson dedicated himself to the medical readiness and training of SFODA 1312.  He deployed with his team a second time to Afghanistan on June 15th, 2016.  SSG Thompson gave his life bringing security and freedom to Afghans residing in Chianjir Village within Helmand Province.

SSG Thompson is survived by his wife, Rachel, his parents, Mark and Lynda Thompson, and his sisters, Robyn and Karen.