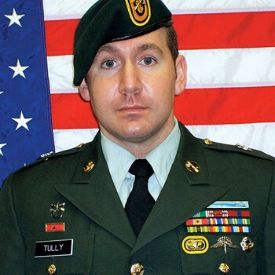 Tully was born and raised in Pa. After initially entering military service in the U.S. Marine Corps, he transferred to the U.S. Army in 1997. Tully was assigned as an infantryman in Company E, 313 th Military Intelligence Battalion, 82 nd Airborne Division at Fort Bragg. Tully then served as a Long Range Surveillance Detachment assistant team leader in the same unit one year later.

In 2004, he was selected to attend the Special Forces Qualification Course at Fort Bragg to become a Special Forces medic. He earned the coveted “Green Beret” and was assigned to the 1 st SFG(A) at Fort Lewis, Wash., in Dec 2006.

Tully is survived by his wife, Heather of Columbus, Ga., and his son, Slade of North Port, Fla.
He is also survived by his father and stepmother, Jack and Marilyn Tully of Falls Creek, Pa.; mother Dolores Newman of Glendale, Ariz.; brother John Tully of Anchorage, Alaska (currently serving in Iraq); and his sister Heather A. Farkas of Northampton, Pa.