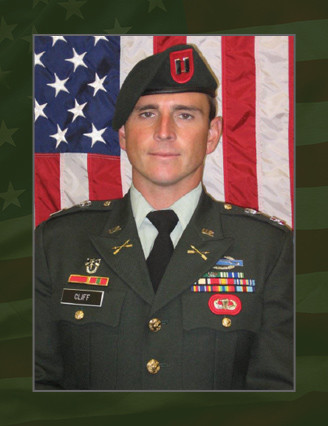 He deployed in support of Operation Enduring Freedom in Sept. 2008 as a member of the Combined Joint Special Operations Task Force – Afghanistan. This was his third deployment in support of the Global War on Terror and first deployment to Afghanistan. He was a Special Forces Operational Detachment-Alpha team commander.

Cliff was a native of Mount Pleasant, S.C., and was commissioned in June 2002 after graduation from Appalachian State University, Boone N.C. After a variety of infantry positions in the Army he began the Special Forces Qualification Course June 2007 and he earned the coveted “Green Beret” in July 2008.

Cliff is survived by his wife, Stacy, and son, Richard, of Sanford, N.C.; mother Julie Cliff, and father Richard Cliff, Sr., and brother Eddie Cliff, all of Mount Pleasant, S.C.