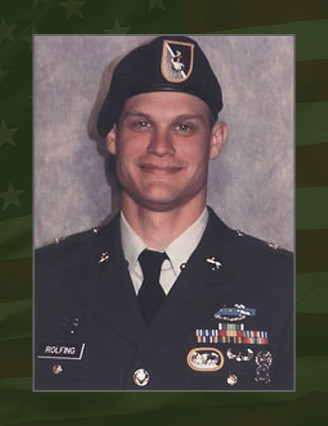 Rolfing, 29, was killed by small arms fire while deployed to Iraq in support of Operation Iraqi Freedom as a member of the Combined Joint Special Operations Task Force – Arabian Peninsula.

He was born Dec. 4, 1977, and was a native of Sioux Falls, S.D. Three years after graduating from Vassar College, in Poughkeepsie, N.Y., with a degree in astronomy, Rolfing enlisted in the Army in January 2003 as an infantryman. Upon completing basic and advanced individual training at Fort Benning, Ga., he was assigned to Company B, 3rd Bn, 187th Infantry Regiment at Fort Campbell, Ky., and joined the “Rakkasans” in Iraq as an automatic rifleman on his first deployment.

Rolfing is survived by his parents Rex and Margie Rolfing, his brother Todd Rolfing, and his sister Tiffany Rolfing of Sioux Falls, S.D.