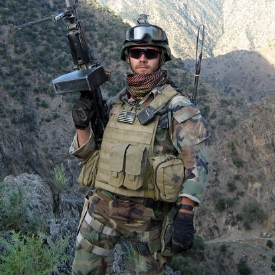 On Sept. 9, 2010, White House officials announced Staff Sgt. Miller would be posthumously awarded the Medal of Honor by the President, at the White House on Oct. 6, 2010. The Medal of Honor is the highest award bestowed an individual for acts of heroism. The award was presented to the family.

Miller was born on October 14, 1983 in Harrisburg, Penn. He grew up in Wheaton, IL where he attended Wheaton North High School. He attended one year at the University of Iowa and then volunteered for military service.

In 2006, Miller deployed with 3rd SFG (A) in support of Operation Enduring Freedom, earning the Army Commendation Medal for valor for his display of courage. He was also promoted to the rank of Staff Sgt. In October 2007, he deployed for a second tour in Afghanistan, where he served as the Weapons Sergeant for his team.

Staff Sgt. Miller is survived by his parents, Philip and Maureen Miller, his brothers, Thomas, Martin and Edward, and his sisters, Joanna, Mary, Therese and Patricia, all from Oviedo, Fla.