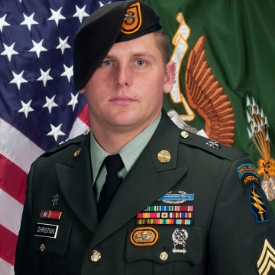 He was assigned to Company C, 2nd Battalion, 1st Special Forces Group (Airborne), Joint Base Lewis-McChord, Wash., and was deployed in support of Operation Enduring Freedom. This was Christian’s second deployment in support of Overseas Contingency Operations.

He enlisted in the U.S. Army Feb. 4, 2004. Upon completion of basic training and advanced individual training, he was assigned to 3rd Brigade, 2nd Infantry Division at Joint Base Lewis-McChord as an infantryman.

He was posthumously awarded the Bronze Star Medal, Purple Heart, Afghanistan Campaign Medal with one campaign star and the Meritorious Service Medal.